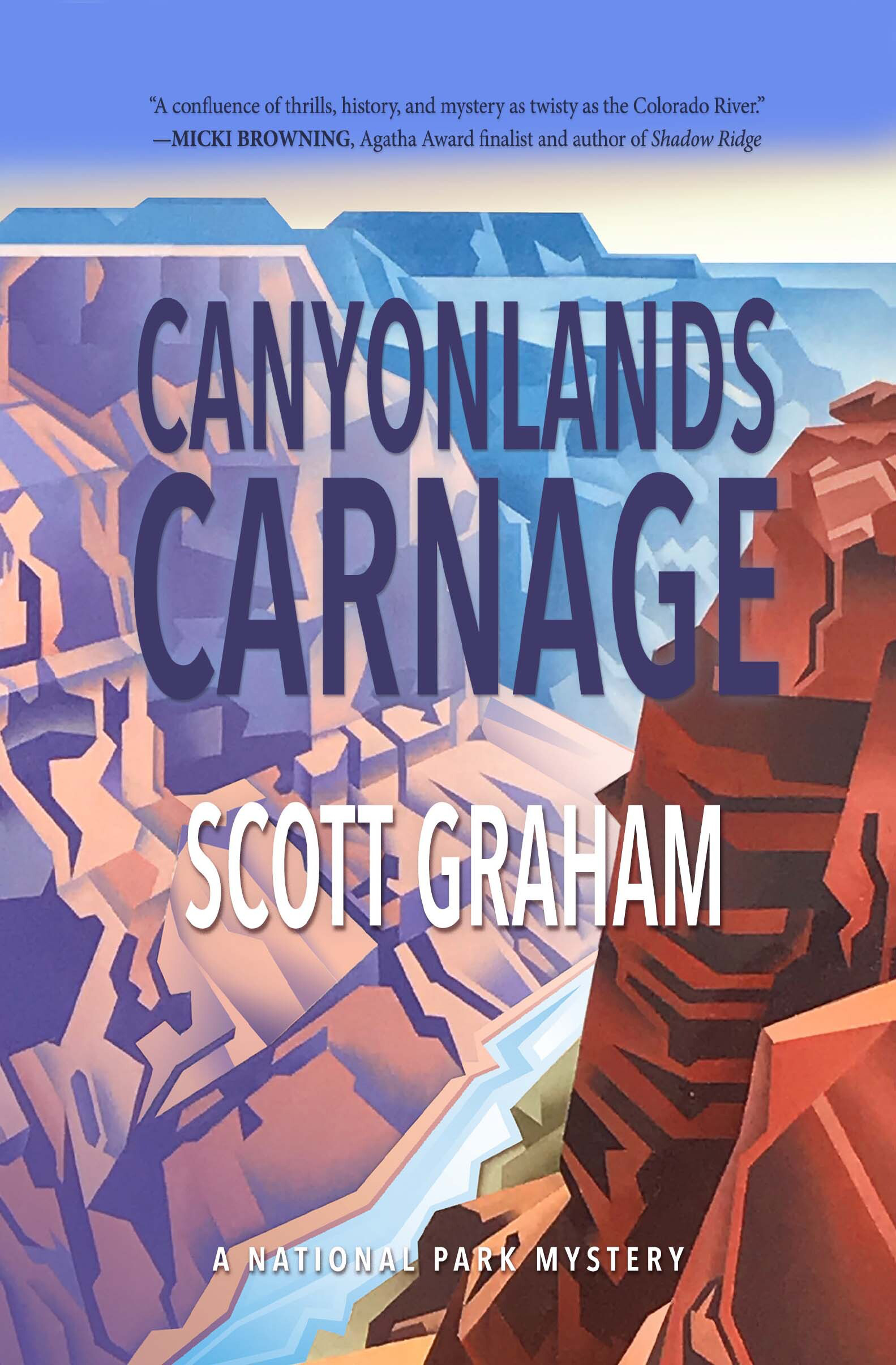 When suspicious deaths befall a whitewater rafting expedition through Cataract Canyon in Canyonlands National Park, archaeologist Chuck Bender and his family recognize evil intent lies behind the tragedies. They must risk their lives and act before the murderer makes an already deadly journey on the Colorado River through Utah's red rock wilderness even deadlier—or turns on them instead.

Outdoor enthusiasts, environmentalists, and history buffs will all find something that satisfies in Canyonlands Carnage. Graham beautifully captures what it's like to navigate the rapids--the danger, the thrill, the skill required--while also painting a vivid picture of the region's myriad natural wonders.
— Mystery Scene Magazine

Canyonlands Carnage, Scott Graham’s gripping seventh National Park Mystery, offers thrills and spills and an insidiously vindictive killer on a whitewater rafting trip through notorious Cataract Canyon, deep in the red-rock heart of one of America’s most spectacular national parks. A breathtaking ride.
— Kevin Fedarko, author of The Emerald Mile

From the exhilarating whitewater opening to the satisfying ending, Scott Graham’s latest outing in his National Park Mystery series, Canyonlands Carnage, is a confluence of thrills, history, and mystery as twisty as the Colorado River.
— Micki Browning, Agatha Award finalist and author of Shadow Ridge 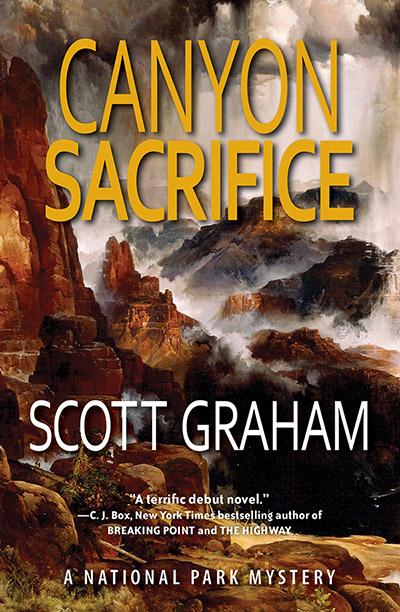 Canyon Sacrifice, book one in the National Park Mystery Series, released in 2014, is set in Grand Canyon National Park. When his new stepdaughter is kidnapped during a visit to the Grand Canyon, Chuck faces up to his secret past and his unfamiliar family-man role as he confronts every parent’s worst nightmare—that of a missing child.

This riveting series debut showcases Graham's love of nature and archaeology, simultaneously interjecting some serious excitement. Graham is to be commended for weaving together several cultures into one story. Recommend to readers who enjoy Tony Hillerman, Nevada Barr, and C.J. Box’s Joe Pickett series.
— Library Journal

A gripping tale of kidnapping and murder in a style similar to mysteries by Tony Hillerman.
— Albuquerque Journal 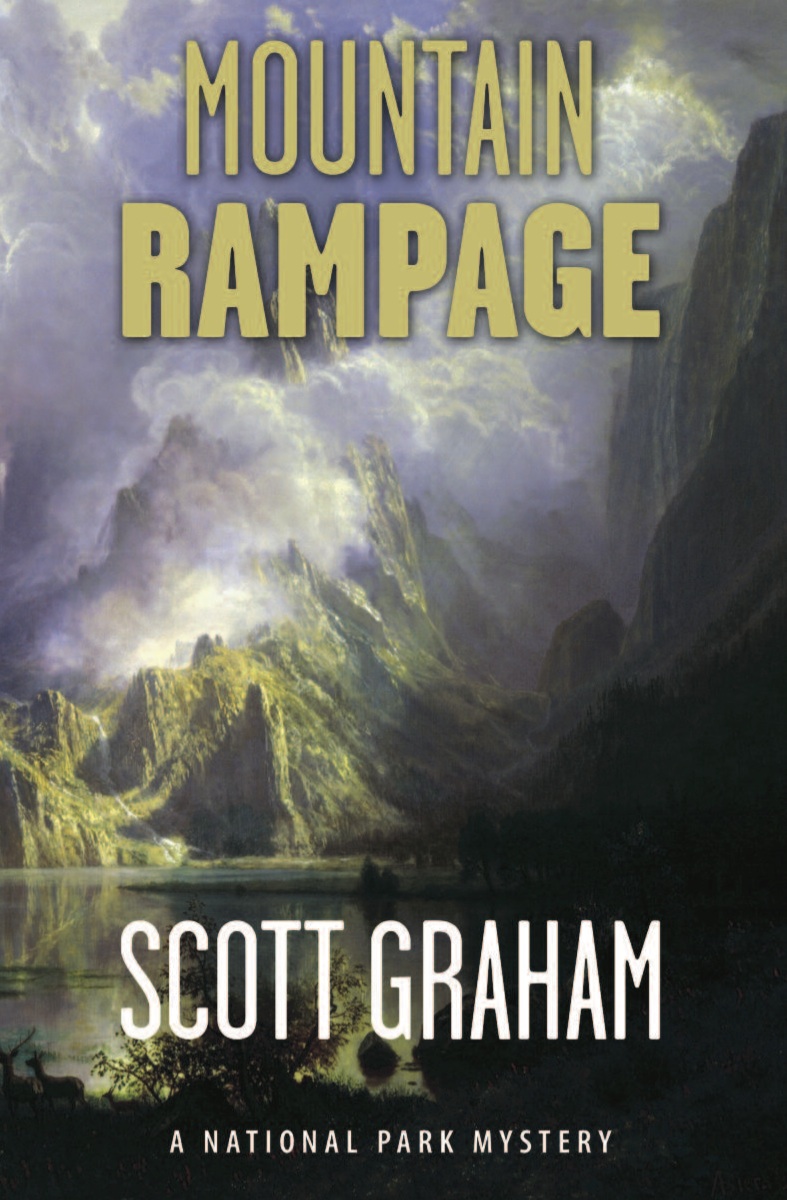 Mountain Rampage, book two in the National Park Mystery Series, released in 2015, is set in Rocky Mountain National Park. Chuck is running an archaeology field school for college students in the park when the summer takes a deadly turn, and he finds himself, his family, and his students in the crosshairs of an unknown murderer.

A fast–paced mystery set in the majestic country around Estes Park, with dozens of quirks and turns. Graham brings his knowledge of mountains and climbing into play as his hero, Bender, scales mountains and rappels down mine shafts.
— The Denver Post

Graham's clever tale is tailor–made for those who prefer their mysteries under blue skies.
— Kirkus Reviews

Description and dialogue balance to bring both the rounded characters and the Rocky Mountain setting alive in this tale of danger, death, and intrigue. Scott Graham has created a satisfying and suspenseful adventure.
— Foreward Reviews 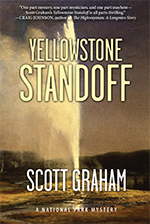 Yellowstone Standoff, book three in the National Park Mystery Series, released in 2016, is set deep in the forbidding backcountry of Yellowstone National Park, where Chuck and Janelle have brought their two young daughters on a two-week archaeological survey. When Yellowstone’s iconic grizzly bears and gray wolves inexplicably go rogue, Chuck teams with Janelle and his old friend, ranger Lex Hancock, to protect the suspect members of a group scientific expedition.

What an extraordinary ride! You know when a reader says they couldn’t put the book down? Yellowstone Standoff is one of those rare books. A tour de force.
— Win Blevins, Pulitzer Prize nominee and New York Times bestselling author of Stealing Fire

Graham does a terrific job of maintaining suspense and keeping the reader wondering what could possibly be happening. The remote forests of Yellowstone are well described, and Graham's writing transports the reader.
— Reviewing the Evidence

Graham's intriguing third National Park Mystery takes archaeologist Chuck Bender to the Thorofare region of Yellowstone. The threatening behavior of the park's predators is worrisome enough, and the discovery of a murdered researcher lifts threats to a whole new level.
— Publishers Weekly 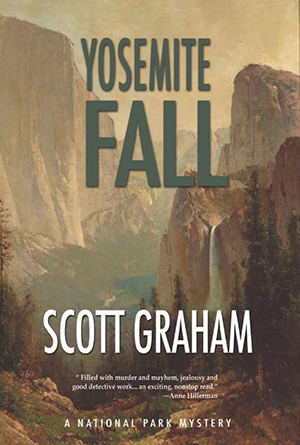 Yosemite Fall, book four in the National Park Mystery Series, released in 2018, is set in Yosemite National Park. When Chuck arrives in Yosemite Valley with his new family to study the 150-year-old murders of two gold prospectors, he and Janelle are suspected in the shocking death of one of Chuck's former rock-climbing partners. Together, Chuck and Janelle race against time to solve the dual mysteries and prove their innocence while facing down a ruthless killer on the loose in the valley.

Only the best novelists have the gift of propelling readers into the middle of artfully crafted adventures, and with Yosemite Fall, the fourth in his National Park Mystery Series, Scott Graham once again proves he belongs in the very first rank.
— Jeff Guinn, New York Times bestselling author of The Road to Jonestown

The historical perspective on the Yosemite area is fascinating, and the plot associated with a young girl's climbing skills helps the non-rock-climbing reader understand the sport as well as adding tension to the story. Graham effectively places the reader in the landscape and history of the West.
— Reviewing the Evidence 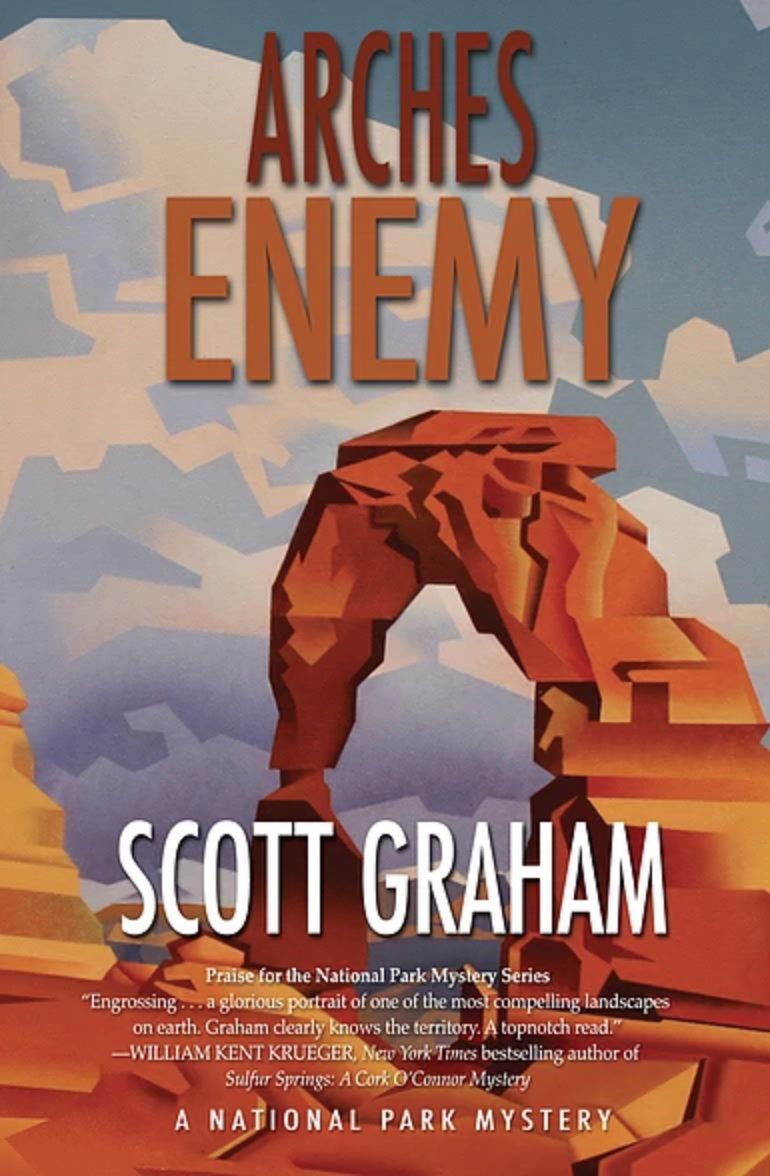 Arches Enemy, book five in the National Park Mystery Series, released in 2019, is set in Arches National Park. A famed sandstone arch in the park collapses and takes a woman atop it to her death, ensnaring archaeologist Chuck Bender and his family in lethal questions of environmental monkey-wrenching and political intrigue. As more deaths follow, Chuck and his wife Janelle Ortega race to uncover the killer even as they become murder targets themselves.

Masterfully plotted in confident prose, Arches Enemy is not only an adventurous and fascinating mystery you can’t put down, it delivers important insight on ancestral cultures and their sacred lands. Scott Graham proves yet again that he is one of the finest.
— Christine Carbo, author of the Glacier Mystery Series 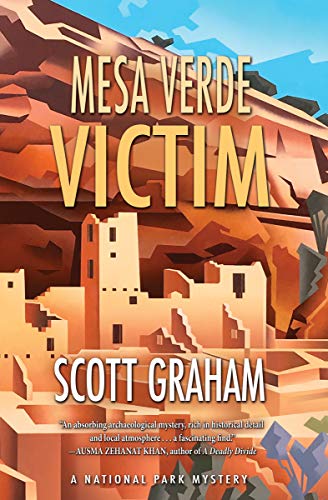 Mesa Verde Victim, book six in the National Park Mystery Series, released in 2020, is set in Mesa Verde National Park. Hounded by false accusations of murder, archaeologist Chuck Bender and his family risk their lives to track down an unknown killer on the loose in a rugged canyon on the remote western edge of the park, where ancient stone villages and secret burial sites, abandoned centuries ago by the Ancestral Puebloan people, harbor artifacts so rare and precious they’re worth killing over.

An expert look at the great outdoors seamlessly incorporated with a focus on the hero’s family.
— Kirkus Reviews

A stunning national park, enchanting local lore, and fascinating archaeology—it’s all there in Mesa Verde Victim. Scott Graham’s latest standout thriller is as full of twists and turns as a mountain road.
— C.C. Harrison, Colorado Book Award-winning author of Death by G-String: A Coyote Canyon Mystery

In Mesa Verde Victim, long-buried secrets are unearthed in a timeless and riveting tale of greed and plundered history set amid the majesty of one of the Southwest’s most beautiful national parks.
— Roger Johns, award-winning author of River of Secrets: A Wallace Hartman Mystery